Most people are not able to differentiate an portable air cooler from an air conditioner portable based on their functionality. Judging from their appearances, these two appliances may seem similar making it more likely for one to conclude that they share common pros and cons. However, the two differ a lot especially considering that they feature different cooling methods. Below is a detailed comparison between portable air cooler and  AC portable.

How Does a Portable air conditioner Work?

Portable air conditioner makes it possible to regulate your indoor temperature without necessarily dealing with permanent installation. This makes portable air conditioning unit good for apartment buildings that do not permit window units or houses, And whose windows cannot accommodate the installation of permanent window units. These types of room air conditioners are designed in such a way that they appear compact in size, are equipped with casters and assembly involves running an exhaust hose to the outside.

AC units have both the hot and cold sides of the conditioning cycle enclosed within a single box-like unit. The air within the room cools the condenser coil while heat is expelled via the exhaust hose.

As the process goes on, water is condensed out of the air and accumulates in an internal drain bucket with time.

Air conditioners are capable of working in places where air coolers are not effective. Their ability to cool air is high, making them more effective. They are, however, costly to use and operate. An air conditioner is the better option in areas that experience more than 20% humidity.

How Does a Portable Evaporative Air Cooler Work?

More than half of your home’s energy bill can be as a result of energy consumed by cooling and heating systems. As the numbers on your thermostat go higher, the cost of keeping your home cool and comfortable also rises. According to studies conducted in the United States, home air conditioning units consume up to 5% of the total energy production countrywide, costing the homeowners more than 15 billion dollars. It is necessary to find a cost-effective way to stay cool. If you live in the right climatic region, a portable air cooler is all you need.

More so, portable cooler is versatile. While personal air coolers are good for cooling a room or parts of your home, commercial swamp coolers cool large areas such as warehouses, entertainment venues, and stadiums.

Portable air cooler operate on the simple concept of evaporation. They consist of a box-like enclosure which contains a walled-fan and wet water-soaked pads. The fan takes in warm air and propels it to the wet pads where the air temperature lowers significantly by up to 20 degrees. This process is similar to what happens when you splash water on your skin during a hot day to feel cool. Considering that they use evaporation to bring a cooling effect, these units consume up to 75% less electric energy than air conditioner units.

Air coolers operate best in dry weather conditions. When used indoors, they require a natural outlet for fresh air such as an open door or window.

More parts of the world have been highlighted as areas where evaporative air coolers operate excellently, As be with the improvement in technology that has made cooling units more universal.

The world map of world cooling shows a huge green band across the middle east, Central Asia, and southern Europe. Areas within the tropics such as the West Coast of USA, Southern Africa, and Latin America also fall under the similar bands. These areas have hot and dry climates that favor evaporative cooler.The areas marked yellow are slightly cooler and are more prone to humidity. These areas include the United Kingdom and Western Europe where this technology works sufficiently well, but not at optimum efficiency. According to science, as global warming intensifies, these regions will develop a hotter climate that favors evaporating cooling techniques, implying that Evaporative air coolers will be cheaper and much more efficient.

Portable air-conditioners vs.Portable Air Cooler : how do they compare?

Every unit style has its pros and cons. It all depends on how and where you want to use it. Check out  Portable Air Cooler and AC portable for the pros & cons : 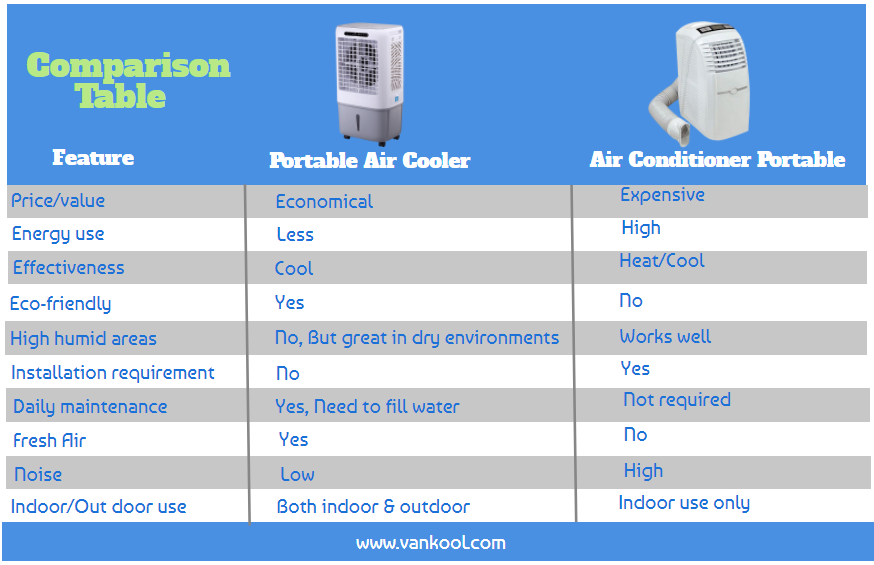 Find the Right Product For You : Air Cooler and AC Buying Guide

Now, you know the differences, hopefully you have a better idea of what you’re looking for. Find the appropriate unit for you: 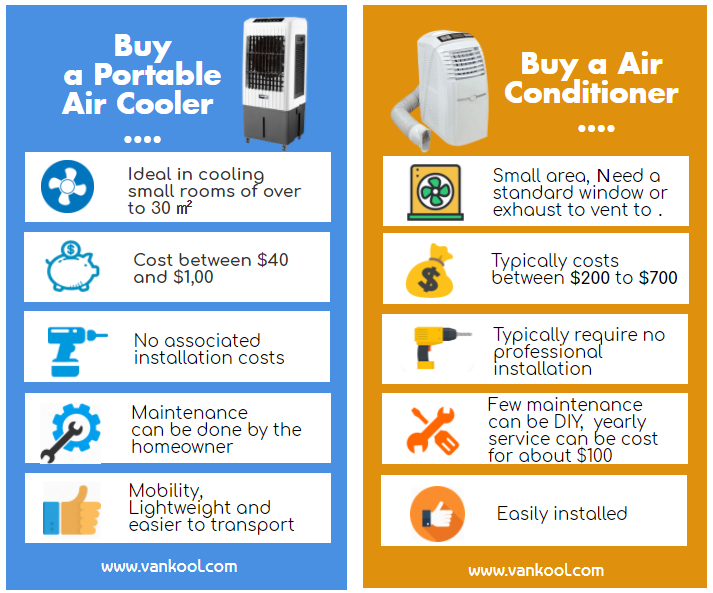 Once you have decided to get the portable air cooler, that the next important step is to choose the brand. Some popular brands of air cooler portable are honeywell evaporative cooler, Luma Comfort air cooler, etc. While if you want to be an air cooler dealer and buy portable evaporative air coolers in bulk, you should consider the manufacturers to get a more competitive price. Vankool could be a good choice for wholesale business since it has been the OEM supplier for Honeywell for more than 12 years.